Patsy creates programs around many themes and many countries.

Here are a few examples of Patsy’s popular programs:

Down on the Farm:

Stories and songs about farms from many countries.

An exciting program interwoven with nursery rhymes, modern day stories and stories Patsy tells about her Grandmother’s life in the early 1900s.

Stories from Around the World:

Patsy takes the children on a journey around the world stopping at different countries for a story or song.

Old familiar tales and rhymes and modern day tales feature in this program with children participating with Patsy in the stories.

Food Stories from Around the World:

Folk tales feature extensively in this program with stories from Japan about Fox and Bear, from Australia with the Hungry Bunyip and stories from many other countries.

Exciting stories about the sea, the lakes, the streams, the rivers and the billabongs. Meet the Wide Mouth Frog and Hermit the Crab or perhaps the King from India who did not like taking a bath.

Stories and songs about the sun, the moon, the stars and other “wonders,” from outer space.

Stories to tell before a Teddy bear’s picnic or on another occasion.

Beat the drum to Africa and hear why Spiders have thin waists or how the largest and the smallest animals became friends.

Meet Kappa the “water imp” puppet and listen to stories about the Old Woman who was not afraid or Chin, Chin Kobokama.. 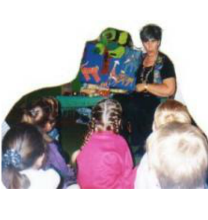 Felt Board telling of The Golden Apple